Dear reader, before I start this short note I would like to say a few words of my own about its nature. I have written a couple of articles before and I always try to get a good balance between positivity and negativity to best reflect my own life experiences as a trans woman. I also like to inject a modicum of humour, which I also hope reflects who I am. I often find this difficult, as discourse about being trans seems to often focus on the negatives, whereas my own experiences are overwhelmingly positive. Unfortunately I have to start with a warning for you, that this article will be different, as coming out for me has always been tough and I have nothing positive to say about it other than it’s an essential element of being able to be myself.

I feel sombre as I sit and write this but hasten that I do not require sympathy or condolence. I wrote another article about bravery, making the point that I didn’t ever really feel brave but that coming out was something that simply had to be done, so I just got on with it.

Dear reader, if you find this article disconcerting, particularly if you have not come out yet, I cannot apologise for it — I can only say that it is my version of the truth. I could never have been happy if I had not come out and, to be clear, it was absolutely the right thing for me to do.

It’s September, 2021, and I’m in the car park waiting to go into the office. The familiar feeling is back. It’s Tuesday and I’ve been stressed for several days now. In fact, I recall having that iced-water-in-the-stomach feeling the moment I was asked to visit the office over a week ago. As the days got closer I began to get more fearful. What words should I use to describe this?

I’ll do my best to describe how I feel but I don’t believe that it’s possible to sum it up correctly. However, I hope this gives at least an impression:

You’re sitting waiting in a room that’s cold and unfamiliar, and there’s a door nearby leading into another room. You’re waiting to be summoned in and you know you have to go but you don’t want to, even though the waiting room is uncomfortable and forbidding. You can’t look at the door, so you gaze at your feet and force yourself to put the thought of going through the door out of your mind.

There’s a large clock on the wall and it’s ticking loudly. No matter how hard you try, you can’t block out the ticking noise. Every now and again you look at the clock and you find your eyes are drawn to it as the hands inch ever closer to midnight. Your stomach is churning, your motions are slowing and a cloud of foreboding descends upon you.

Eventually, the clock strikes twelve and the door opens. It’s seemingly your choice whether or not to go through it.

I’m trans — there is actually no choice at all. As much as I don’t want to do it, I have to go through the door.

By force of will, I stand and shuffle toward the door with a huge weight on my shoulders and a sense of dread. I enter the door and in the adjoining room are faces, maybe friendly ones. I struggle to smile but eventually I feel myself starting to recover and the black clouds lift. At some point I feel relief and begin to return to normal, although I feel no sense of joy or achievement: only weariness.

This is how I feel each time I come out. I felt the oppression descend as I wrote those feelings and lift as I neared its end. I have only ever experienced something similar on occasions, such as ending a relationship, having to announce bad news, or deliver bad news to someone else.

I hope you have never felt this way, although I suspect this is common to us all as human beings.

My first coming out was in November 2018. I had tried to make friends online to build a network and find the right way to do this, as if there was some kind of online manual. In actuality, I found from standard search engines websites of a very dubious nature and the occasional trans support group, which I did not want to join.

Eventually, I found a website that was more friendship-based and I started chatting to a few individuals. I found out a good place to come out was at an LGBT nightclub that ran a monthly trans get-together, or “The Big Night Out.”

I asked an individual if they would meet up with me and they agreed, so I didn’t have to walk in on my own. Little did I know (in my naivete) they had assumed I was looking for a hookup. I quickly manoeuvred out of the situation and moved on to someone else. Thankfully, they seemed genuine enough and agreed to meet up with me.

There was a hotel opposite the nightclub and I found that everyone trans would meet up at its bar for drinks beforehand. So I booked a room. In the coming days, I experienced all of the intense emotion of coming out, as described above.

I packed that day, drove down to the hotel in a zombie like state and checked in. I felt physically ill for the whole time and asked myself over and again “what was I doing?” or saying to myself “you don’t have to do this”. Thanks goodness, the desire to be myself and the inevitability of it kept me going throughout. I went up to the room and being in “drab” (male appearance), I unpacked and set about preparing myself with the makeup, wig, etc. Eventually the time came, I texted my ally and they came to the room to get me.

Dear reader, if proof were needed: Here I am. 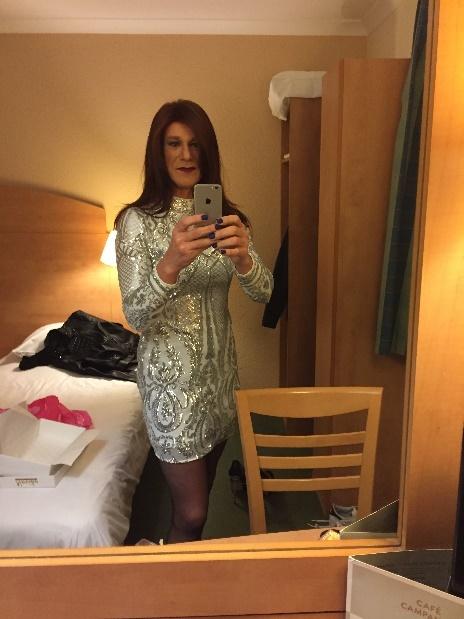 As I walked down to the bar and entered, I genuinely thought to myself, “wow, this room is full of trans people.”

It then occurred to me that I was now one of them. It was not too long before we had moved over to the nightclub and the rest of the evening was indeed joyous for me as I experienced my first ever real taste of being myself.

Although I don’t attend trans meet-ups much anymore, I am forever grateful to that nightclub, that group of people and that individual in particular.

Back to my opening paragraph about coming out in September 2021: What was that all about?

For me, coming out has happened over and over and over again, like some demented version of Groundhog Day. Sometimes it’s worse than others but the basic sensations and use of emotional energy are the same.

Probably at the top of my worst experiences was coming out for the first time in daylight, closely followed by coming out to my kids and now ex-wife.

Perhaps the bottom of the list (meaning same symptoms but lower severity) would be meeting someone at work who I have not met before. I came out that night in 2018, then I came out to my kids, then to close family, then to friends, then to people at work. That’s it all over with right? No chance. I had to announce my transition, first to family, then friends, then at work, etc. Then there is the physical day of transition and most importantly that day of going into work.

Maybe one day it will be done, I sure hope so, but somehow I doubt it.

That’s my story of coming out, about it being horrible, draining my energy and constantly jumping out of the dark to scare me. As unpleasant as it might sound, I ask you to rest assured that I came through it perfectly okay and I am in a much, much better place now.

It was all worthwhile — albeit I stress again — that I didn’t really see any alternative, so just got on with it. If you are in that waiting room and you can hear that clock ticking, please remember I am waiting for you in that room next door. I will be there for you when you walk in to put my arms around you and welcome you to a world of being yourself.

Wherever you are please stay safe and look after yourself. I wish you all the best and if you are trans, please know that you are not alone.